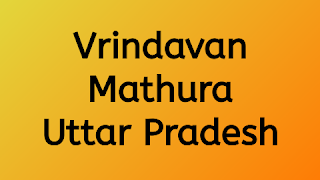 Being a mythological place, the history of this place is also very beautiful and rich.
Legend has it that Lord Krishna spent his childhood days in Vrindavan.

Whenever Mathura is mentioned, the scene of Lord Krishna's child leela suddenly emerges on the screen of my eyes.

The same thing happened this time too.

Then what was it that after catching the train from Delhi reached Mathura and then Vrindavan.

Mythological belief is that Lord Krishna spent his childhood days at this place.

Because of this, this entire region is called Braj Bhoomi. Situated on the Agra-Delhi highway,

there is no direct access to this place, yet it is connected to many major roads of the country and is easily accessible.

Dedicated to the worship of Radha and Shri Krishna, this place is in a way a land of temples.

Thousands of small and big temples are located at this place and tourists visit here throughout the year.

In such a situation, if the occasion is of Krishna Janmashtami festival, then the movement of tourists increases more.

Being a mythological place, the history of this place is also very beautiful and rich.

It is believed that Vallabhacharya came to Vrindavan at the age of 11.

He walked barefoot and campaigned across the country to highlight the importance of this place.

This played a special role in the religious establishment of this place.

Chaitanya Mahaprabhu has also been associated with this place.

There is also a mention of Meerabai and her love for Krishna.

Meera left Mewar and came to Vrindavan after being absorbed in the devotion of the Lord for a long time.

Similarly the names of Surdas and Swami Haridas are also associated with Vrindavan.

I went to Banke Bihari temple.

This temple built in Rajasthani style is dedicated to Shri Krishna and is one of the prestigious temples of the country.

In this the image of Lord Shri Krishna appears as a child. Similarly Prem Mandir is known for its architecture and beauty.

This temple is dedicated to Radha-Krishna and Sita-Rama.

Shri Raghunath Temple and Katyayani Shaktipeeth, but could not go due to paucity of time.

If you have time, then definitely go.

Apart from this, places like Shri Radha Damodar Temple,

can be seen in Vrindavan.

There are also hundreds of ashrams and many cowsheds in Vrindavan.

If the name of Himachal comes and Chamba is not mentioned, then something seems incomplete.

Chamba is known as the oldest symbol of Pahari culture and heritage. It was once the capital of the hill kings.

Today it is known all over the world for its beautiful temples.

This place was established about twelve hundred years ago by King Sahil Varman in the name of his daughter Champavati.

Do not know that many centuries have passed, but surrounded by high hills,

this place has still preserved its ancient culture and heritage, for a glimpse of which tourists reach Chamba from far and wide.

The nearest airport to Chamba is Amritsar, which is 240 km away from Chamba.

Buses or taxis are easily available from Amritsar to Chamba.

As soon as you step on this place, you will get to see many signs of ancient times.

The city, which has made its mark for temples and handicrafts, is full of tourist places.

Raja Sahil Varman also built a temple dedicated to his daughter at this place which is known as Champavati Temple.

Champavati is said to have inspired her father to establish the city of Chamba.

The temple is built in the shikhara style, with beautiful stone carvings and the roof is wheeled. While in Chamba, do not forget to visit Chamunda Devi.

Chamunda Devi is called the goddess of Chamba. Similarly, Laxminarayan Temple is the largest and oldest temple located in Chamba.

While in Chamba, the village of Koorra can also be visited.

It is believed that during the Mahabharata period when the Kauravas had given exile to the Pandavas,

the Pandavas had lunch with Mata Kunti at this place and the village was named Kuntapuri after her,

but later gradually Slowly people gave it the name Koora.