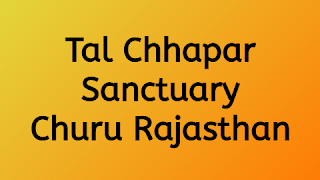 Whenever I mentioned Tal Chhapar these days, it is known that there are a large number of people who have not heard either the name of that place,
and if they have heard, they have not reached there.
These include those living in the capital of Rajasthan.
But one thing is funny that whenever I took the name of Taal Chhapar from people, told about the black deer there, then the name of actor Salman Khan definitely came up.
Everyone remembers the story of the black deer hunting, but they do not reach to see Tal Chhapar, the unique settlement of that beautiful creature.

Despite being near Tal Chhapar Bikaner and Shekhawati, this stranger became a victim only because neither the tourism nor the forest department paid attention to it.

All the attention is on Ranthambore and not the tigers, then the leopards.

Those who take pictures of wildlife, they reach anywhere, so they reach here too.

This time the attraction of my going to Taal Chhapar was the owl with long ears.

Years later, the desire to be able to see the long-eared owl of North America and Europe so closely took me to Tal Chhapar.

Tal Chhapar is located at Churu, 230 km from Jaipur.

The route covered through Sikar and Sujangarh, but the two and a half kilometer route that passed through the middle of the Tal Chhapar Sanctuary,

it really tastes the fun of adventure tourism.

The car jumps and jumps because it cannot walk.

The good thing is that along with us, deer also kept jumping here and there.

I had seen them from Bishnoi villages to Tal Chhapar in the past but every time they find me more beautiful than before.

It was learned from the sanctuary office that we had to travel around, not by that route.

Well, on reaching there, when I saw the rooms of that forest rest house, I was surprised because they are so well built that your first question will be that when and who got it built.

We decided to stay there for the night. Well, in a hurry to see the owl, we first went inside the forest, but when we saw the mothia grass spread far and wide, we remembered the forests of Africa.

This sanctuary was the favorite hunting ground of the visionary Maharaja Ganga Singh of Bikaner.

Umesh Bagotia of the Forest Department told that how much care has to be taken in preparing that meadow.

Two of my guests who were preparing for the Ramgarh festival had also arrived. We saw many eagles, foxes and prickly-tailed lizards along with owls.

When he returned, there was a discussion on the architecture of the rest house over tea.

The construction of the roof there was also environmentally friendly. Suddenly I remembered Bibi Russell, a UNESCO awardee who gave a new direction to Bangladesh's handloom and crafts.

He did a lot of work in Chhapar. And remembered Savita Rathi, the head of Gopalgarh, because of whom I had gone there first to explore the possibilities of tourism.

I spoke to Bibi on the phone. Spoke to Savita ji also.

He narrated the story of the self-help group's hand craft scheme, its success and failure.

I would definitely like to tell what I found on the net about the rest house.

It was conceptualized by the late Revathi Kamath, who was a well-known name for molten architecture.

He had also built the tribal museum of Bhopal. In this sense, this rest house is a trust and a plaque must be put up.

Also, no type of construction should be done away from the hypothesis given by them.

No one has seen this beautiful dream, it must be kept alive.

Why this Tal Chhapar is not promoted by connecting Shekhawati and Bikaner before falling in the trap of schemes here and there.

I am now preparing to go there again before the migratory birds return.

It is located in Chhindwara district of Madhya Pradesh.

It is situated in the picturesque valley of the Satpura ranges.

Located at a distance of 40 km from Chhindwara, this place is like a hidden treasure inside the forests.

When leaving behind the glare of the city and entering the forest, the views look like a unique creation of a painter.

From the soil to the vegetation and the sky, the colors also start getting darker.

When it comes to crossing the Umra Nala and descending the mountains, one cannot even imagine that there could be a valley within these forests extending to the far horizon, where once there used to be a splendid city.

Devgarh is the name of a picturesque valley surrounded by mountains.

This bowl-shaped valley has been created by nature in such a way that mountains have been selectively appointed for the protection of this valley.

The mountain situated to the north of Deogarh is known as Khairgondi.

Nai Ghundi mountain is situated in the south, connected to it on the right side Dorli mountain is visible from a distance like a wall.

Next to it is the Kosa Badicui mine hill in the west, in which river Dev Jhiri flows.

On the opposite side of this mountain i.e. in the west is the Deogarh Valley mountain, in which the river Dev flows.

This river goes further and joins the Kanhan river.

Seeing this unique geographical position, the mind is filled with wonder.

Like a great architect must have crafted this place with great care.

Nature has designed this place in such a way that no matter how much rain falls, the people living in Deogarh will never have to face floods.

Efforts have been made for additional drainage at this place by two rivers.

There is a mountain in the middle of the layers of mountains, on which the fort of Deogarh is built.

The specialty of this fort is that the fort is not visible from outside.

This fort is not visible even when viewed from below from Vijaygarh.

Only the flag of Maa Chandi waving in the air on the top of the mountain is visible, while looking down from the fort can see the entire Vijaygarh.

There are sixteenth century stepwells spread in the Daman of Deogarh, which were earlier in oblivion.

Recently these wells have been renovated. Deogarh has a very old relationship with Jalnidhi.

This is the place of stories tales. This thing is popular in the public about here - '900 wells, 800 steps'.

There is no written proof of this, but everyone here believes it to be true.

These wells and stepwells are actually in existence in the forests of Deogarh, buried by soil, trees, bushes.

The forest around Deogarh is part of the dense forests of Satpura.

There is a huge potential for eco-tourism here.

This place has such a magical charm that once one comes here, he stays here.