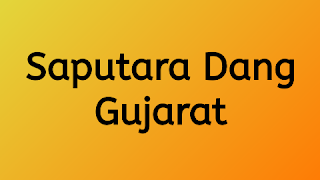 The only hill station of Gujarat falls in Saputara Dang district.
The forests here are intoxicating.
This forest wealth filled with teak and bamboo trees was once a center of attraction for the British as well.
This jungle is home to Worli, Khumbi, Bhil and Dangi tribal communities.
It is said that these people came and settled here during 8th to 10th century and lived here.
This society, which calls itself Jungleputra, has great affection for the forests.
Its effect is seen on every aspect of their life. Their musical instruments are also made of bamboo.
Masks made of bamboo are used in their folk dances. The shape of trees is also used in tattoos made on the body.

The reason for this is a beautiful and picturesque lake built in the middle of Saputara, which is the main reason for the attraction of tourists.

There is a very quiet and beautiful garden near the lake here, Saputara Lake Garden, where there are many attractions for children's entertainment.

Saputara is a part of Gujarat, but due to its proximity to Maharashtra, the impression of Maharashtra is also seen on its life.

The life of the Dangi tribal society has been depicted very well in the museum through various materials.

The main attraction of Saputara is its plateau and ghats immersed in greenery.

People come here in monsoon to see their beauty.

There are many points to see this entire place, in which one point is Sunset Point.

In the evening, a fair is held here. Similarly Table Point is a flat place built at the height of the hill.

There are a variety of means for the entertainment of the children here.

A new attraction is also added to the attractions of Saputara, the ropeway built here.

Sunrise is very beautiful from Sunrise Point. There is a point before entering Saputara, which is named Echo Point.

If you are in the forests of Dang, then definitely stop for a day in the log hut built here.

By staying in these, you will definitely get the feeling of living in the forest.

If you have gone on a walk in the forest, then it is bound to be possible to get acquainted with the gift of the forest.

In such a situation, definitely go to see Honey Bee Center.

Saputara is the land of serpents.

The evidence of this is also found from the Nageshwar Mahadev temple located here.

This temple has great recognition in the tribal society here.

Nageshwar Maharaj is considered to be the God of serpents.

On the day of Nag Panchami, a large crowd of devotees gather at this temple.

Saputara Adventure Park is built for the youth near Sunset Point on Governor's Hill.

There are many activities related to adventure from 8 in the morning to 6 in the evening.

To reach this place, you have to go to Table Point. Paragliding is also done here, but it does not happen in the rain.

The nearest railway station to Saputara is Waghai, which is located at a distance of about 50 kms from Saputara.

From this station, tourists can easily get trains to Mumbai, Delhi, other places.

Saputara is located at a distance of 250 kms from Mumbai, while the distance from Surat to Saputara is 160 kms.

Bihar has a long chain of ancient mythological and historical sites full of natural beauty, which not only attracts tourists from India but also from abroad.

After crossing several stages of my journey to Bihar, I traveled a hundred km in the south-west direction of Patna.

Got a chance to know about the world famous Rajgir situated at a distance of Rs. Rajgir is a very beautiful place situated in a valley,

The beauty of these hills is very different, every hill located here has a temple related to Jain, Buddhist or Hindu religion.

This is the reason why Rajgir is also called 'Tirth of three religions'.

Rajgir district was known as Rajgriha in ancient times.

Prior to Pataliputra, Rajgir was the capital of Magadha Mahajanapada and has its own legendary and glorious history.

There is also Son Bhandar cave in Rajgir, about which legend has it that a priceless treasure is hidden which no one has been able to find till date.

Nalanda, Pavapuri, Rajgir and Bodh Gaya are situated in a link on the route by which Lord Buddha came from Bodh Gaya to Rajgir.

There are 26 Jain temples on the hills around Rajgir, where the way to reach is inaccessible.

The remains of that site still exist. After Buddha's Nirvana, the first conference of Buddhists was held in the cave of Vaibhagiri hill.

In this conference, the best book of Pali literature 'Tripitaka' was prepared.