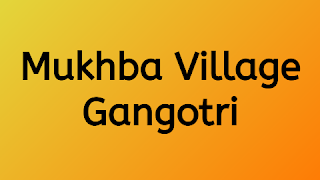 Mukhba is said to be the village of the Tirthpurohit Semwal people of Gangotri.
Fourteen generations have lived in this place. After knowing this, I also wished to go there.
The temple starts as soon as you enter the village, after which the village can also be visited.
The fragrance of flowers and herbs keeps coming everywhere in this village.
Situated on the Gangotri highway, 75 km from the Uttarkashi district headquarters, this winter migration site of Maa Ganga is also called the Main Math.

The Himalayas are completely full of mysteries.

The mystery deepens as you get closer to it. The same thing happened to me a few days back.

When I expressed my desire to go to Gangotri, a gentleman said that it is fine, but Ganga ji's maternal uncle is just two kilometers away from here.

Go there first. Ganga's maternal uncle? When I asked in a slightly surprised tone, he told that there is Mukhba village nearby, where Ganga Mata stays during winters.

Right now he is in Gangotri, but after Diwali, as soon as winter starts,

his idol will be installed in Mukhba village and for the whole six months, he will be worshiped and aarti will be done in this village by the people of Gangotri Teerthpurohit Semwal.

This is the reason why Mukhba is called the village of Semwal people, the pilgrimage priests of Gangotri.

Fourteen generations have lived in this place. After knowing this,

I also wished to go there. The temple starts as soon as you enter the village, after which the village can also be visited.

The fragrance of flowers and herbs keeps coming everywhere in this village.

Situated on the Gangotri highway, 75 km from the Uttarkashi district headquarters, this winter migration site of Maa Ganga is also called the Main Math.

About three to four hundred families live in this village. Most of the houses in the village are traditionally made of wood.

Seeing the shade of nature and feeling the air from this village is a different experience in itself.

There is a different experience and adventure in winter.

The entire area is covered with snow and most of the people leave the village and move to the downstream village.

In this village, the glory starts again after March and nature starts filling beautiful colors in this entire area.

Herbs start sprouting all around the village. Fruit trees are covered with flowers.

As the month of May-June begins, greenery spreads all around.

Apple orchards are plentiful in this village and this is also the means of livelihood for most of the people.

A little bit of Rajma is also cultivated and the rest of the village does the religious work of conducting worship.

Meru and Sumeru can also be reached through this village, where mountains like gold are visible in the morning.

There is also a waterfall on the way above the village, where tourists like to go.

According to mythological beliefs, the Pandavas had reached Mukhba while roaming during Vanaprastha and were staying here.

I am fond of travel, so often I watch, read something related to travel.

That day also I was surfing some such internet when I got an ad popup.

In that ad it was written that Indian Railways is running Steam Express.

I wondered how Steam Express in this age? Because where these days there is talk of bullet train.

In that time, the Indian Railways is running the Steam Express, the old-fashioned steam locomotive train again.

Meaning that we used to study in schools that in earlier times the steam locomotive train used to run.

She is being driven once again. Immediately made up my mind that I have to travel in this train.

This Steam Express named as Ferry Queen. It is running between Delhi Cantt Station to Rewari Junction.

Indian Railways will run this Steam Express from 14 October 2017 to 28 April 2018. This train will be run entirely on coal.

All the information on the website was from when the train would run.

How much will the rent be? What will be the timing? That is, the basic things that are necessary to know before traveling in the train.

From the phone number given on the website, it was found that you can book Steam Express tickets online or you can also take tickets in direct train.

The ticket rates were a bit high because a person can easily reach other corners of the country by Indian Railways for Rs 3240.

But when it comes to inheritance, so much has to be spent because it is very important to have such experiences in life.

Well, the complete itinerary of the train was written on the website that the train will leave from Delhi Cantt railway station at 10.30 am.

At the same time, this train will reach Rewari at 1 o'clock.

Apart from this, for those who want to come back to Delhi by this train, the same train will leave Rewari at 4.15 in the evening and will reach Delhi by around 6.15 pm.

Yes, in return this train will come with diesel engine only.

Well that morning came when I was standing in front of Ferry Queen i.e. Steam Express at Delhi Cantt Railway Station.

The train was just about 15 minutes away. When I entered the train,

I saw that there is no dirt of any kind in the train. The seat is very nice.

The decor was absolutely worth seeing. Sitting in the train, it was as if some royal-c, the feeling of Raja Maharaja was coming.

The train left exactly its scheduled time at 10.30.

When the Steam Express engine made its first whistle, the sound was exactly what I had heard on TV.

When I came to know that a train is running by the name of Steam Express, an image came to my mind that if this train will run on coal,

then obviously its speed will also be very slow. But when I sat in the train and the train had started, seeing its speed, I realized 'I was wrong'.

The train stopped 2 times in between Delhi to Rewari.

Whenever the train stopped at any station, everyone would see this train and start taking photos with it.

When the train reached a big junction like Rewari, the crowd of people at the station was worth seeing.

Everyone was looking at the train as if they had seen something different.

I also got down at the station and talked to the people, people said that they have seen such a train for the first time.

At the same time, I found such a boy who had missed his own train while trying to take selfies etc.

After reaching Rewari, he went to the 'Rewari Steam Loco Museum' located adjacent to the station.

When I went to that museum and saw it, I was astonished. There were steam locomotive engines as old as 165 years.

which are still running today.

At the same time, there are some engines that are being repaired so that they can be run again.

Among these, the most beautiful and attractive look is that of Akbar and Angad Engines.

After seeing this place, I remembered that many films have been shot here.

Apart from this, a documentary is also shown here wearing a VR box, in which all the details of how the train has changed from time to time

It was around 4 o'clock in the evening when some of the train officials who came with us informed us that now it is time to leave for Delhi.

At 4.15 pm we were standing at Rewari station to come to Delhi.

The entire journey of the Ferry Queen i.e. Steam Express was coming to an end.

Let me tell you that Rewari is the junction of India through which trains go for many directions.

Apart from this, this type of Steam Express is being run from Delhi to Alwar for many years.