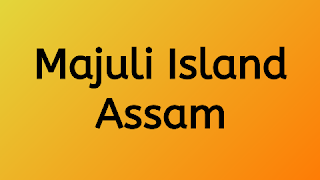 It seems that memory is a journey. When all my journeys are over, it is these memories that keep me moving.
Through these I repeat the journeys made in the past.
This time the place that has cropped up in my memory is the Majuli island of Assam which is said to be the largest river island in the world.
However, there is controversy regarding this.

Banal, Amazon, Marazzo There are many big islands in the world, but at one end of them is the Atlantic Ocean.

In September 2016, the Guinness World Book of Records ranked Majuli as the largest river island.

With the declaration of a district, Majuli has now become the first river island district of India.

The fact behind the formation of this island on the Brahmaputra river is that in the beginning of the seventh century,

Majuli was a part of a large piece of land, but due to the changing of the Brahmaputra river and the accumulation of sand, it gradually turned into an island .

Due to the continuous accumulation of clay and sand, this land became fertile and made a large part suitable for mass settlement.

Majuli Island has been the home of Assamese civilization and the cultural capital of Assam for over five centuries.

The island is world famous for its Vaishnava dances, Raas festival, terracotta and tourism. Like the ancient times, the Gurukul tradition is still going on here.

Majuli is called the land of sessions, which play a big role in maintaining the administrative system here.

The pure environment makes it conducive to flowers and flora.

Farming and fishing are the main sources of livelihood of the people.

Mask making was once the main business here, which is slowly dying out.

In relation to Majuli, it is said that there will not be as many boats here as in Venice, Italy.

Among my concerns is the shrinking of this river island, the loss of a diverse culture. The reasons for this are natural.

The Brahmaputra floods take away a piece of Majuli every year.

Some surveys suggest that the island will be completely extinct in 15-20 years, while some claim the opposite.

At present, efforts are being made to include Majuli in the list of UNESCO World Heritage Sites so that it can be saved.

If you come to this place, then try to understand the people, life and cultural plurality of this place while visiting, you will like it.

You will realize that there is no other beautiful place on earth like Majuli.

I had never read or heard of this village.

On my second trip to Ladakh, during my halt in Nubra, I asked my guide to take someone to a place that was not included in the places tourists usually visit.

The guide said that he can take me to a village whose beauty competes with Switzerland and very few people go there and foreigners have to take permission to go there.

Well, the guide had not seen Switzerland, but his faith was amazing.

Even after knowing that the journey would take eight hours to travel, my lofty mind had decided to go there.

We left early in the morning. The road was bumpy, but very beautiful.

When the greenery, the big trees and the clouds floating below were suddenly visible from afar, the guide would break the silence and ask, why ma'am, is our Turtuk more beautiful than Switzerland?

The history of this small village being a little here and there, takes us to the month of December 1919,

when the battle of Turtuk was fought from the eight to fourteenth, in which the Indian army defeated the part of Turtuk.

Was withdrawn in its possession, but half of it is still in Pak Occupied Kashmir.

Turtuk is in the Baltistan region, which was once an independent state.

Different tribes and dynasties ruled there, the chief of which was the Yagbu who came from Central Asia and ruled for about a thousand years.

It is worth noting that at one time this entire area was an important part of the Silk Route and a major center of Buddhism.

Even today, many people are associated with the Nurbakshiya sect, while Shia and Sunni ideologies have changed since the nineteenth century.

In eighteen hundred and thirty four, Maharaja Gulab Singh took it in his possession.

So all the history to know from some guide, then Yabgomohammed Khan Kacho, the king of Turtuk.

There used to be a king, but now he is the descendant of that former royal family, which once saw a time full of glory.

His residence which is called Rajmahal for its name and the same is the condition of his museum. Yes, in that village of about three hundred and a population of four thousand, his house is at a height, just as much glory as it looks.

The rest is reflected in their speech and eyes, which were telling tales of the bygone era.

I still can't forget the white faces and brown eyes of the little kids there.

It was about these days, when I went there.

Since a few years passed and the epidemic was still hitting Kovid, I thought that before writing about Raja ji, I should know about his condition.

After a huge search on the net, the person whose number came in hand said that 'Madam Raja is made by social media, by the way, they are fine'.

The man I spoke to was born in India's Turtuk village at the age of nineteen eighty-four.

That's why he must have found all this story, but even if the media has made it, he is the king.

Trutuk is indeed a gift of nature in itself, one should reach there for his own soul, not to remember Switzerland.

Trutuk is indeed a gift of nature, one should reach there for his soul, not to remember Switzerland.

Turtuk's museum, which still houses the memory of former kings.