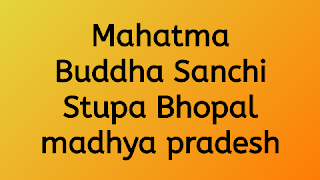 Went to Vidisha to visit a friend during a Bhopal trip and while walking on the beautiful banks of the Betwa river,
I had no idea that we were all standing around the oldest stone structure in India.
Then he said, let's go to Sanchi this evening. 'Sanchi?', I asked.
He replied, 'Yes, Sanchi' and soon after we all reached this small village panchayat located in Raisen district.
'Is this the same Sanchi, which is known worldwide as the historical and archaeological heritage of Mahatma Buddha?'
He said, 'This is the same place and there are not one but many monasteries, temples and Buddhist monuments here.
All these structures were built around the 3rd century, due to which these monuments come in the oldest stone structures in the country.

The world famous Sanchi Stupa is situated at this place.

As soon as we reached here, the Sanchi Stupa in the form of a dome shaped chamber was visible in front and as we got closer a wonderful calmness was felt.

For a while I too sat and gazed at this wonderful structure.

There is a path around the dome, in which four gates have been made for the entrance, which are excellent specimens of art and architecture.

These depict the life of Lord Buddha in the form of words and symbols.

Feels like just sit here at some place and keep repeating the teachings of Mahatma Buddha.

The calmness experienced in the surrounding desolation of this place has never happened before.

This place is situated at a high altitude. Look at it from anywhere the dome is clearly visible.

Dates of the third century have been shown in place on it.

It is said that this stupa was built by Emperor Ashoka at the behest of his wife, but in later days it turned into ruins and was buried under the soil.

It was discovered again in the year 1818 and its lost beauty gradually returned again.

After the nirvana of Mahatma Buddha, Emperor Ashoka showed his immense reverence and faith in Buddhism.

He built a large number of stupas in India and Afghanistan for propagation.

Somewhere it is also mentioned that during this period Emperor Ashoka built about 84000 stupas.

The Stupa at Sanchi is considered a symbol of love, peace and faith not only in India but all over the world.

Its design and workmanship are so wonderful that in 1989 it was included in UNESCO's World Heritage and is working for its conservation.

This place is known as a wonderful example of architecture.

There is a wonderful hypnosis in the mountains and nature of Chakrata.

There also seems to be a stagnation in the dynamism of this place and this stagnation is clearly visible in the lives of the people here.

Chakrata is a small hill-station far away from the hustle and bustle of the world.

Located about 90 km from Dehradun, this place is known for its serene environment, biodiversity and beautiful weather.

The calm atmosphere and pollution-free environment here is such that once the mind is lost in nature, it remains lost for hours.

Sometimes it seems like where have we come from? Which world did you come to?

There is a wonderful hypnosis in the mountains and nature of Chakrata.

There also seems to be a stagnation in the dynamism of this place and this stagnation is clearly visible in the lives of the people here.

I also visited many villages of Chakrata. The introduction of these villages is still very old.

These people are still adopting their age old lifestyle away from the fast paced life of the world.

Their life still seems to be confined to their forest and animals.

I found both the Chakrata forest and the mountains very special.

While roaming around this place,

I realized many times that I would hardly get to see such beautiful forests anywhere else.

My feet stopped in place. Then whether it is Koti Kanasar or Moyla Bugyal.

I went to these places and spent a lot of time there. I found these places geographically quite difficult and challenging as well.

The path of Devavan was so difficult that he had to return midway.

Yes, the northern part of Chakrata offers an attractive option for nature lovers like us.

The long trail is also fun, passing through virgin forests of conifers, rhododendrons and oaks.

Among the special things of Chakrata are the huge dense forests here, the charming village of Jaunsari tribe, the 10,000 feet high peak of Kharamba spread in this area.

Simultaneously when we descend on its northern slopes, the 9000 feet high peak of Mundali is visible.

It also fascinates us with its beauty.

Far away from marketism, it seems that this is a different world.

The highway is world class, but hardly ten vehicles pass in a day.

I came here and learned to scooty and also run at a speed of 60-70 kms on high hills.

One day he walked for 15-20 kilometers and reached Budher's cave.

Everyone was saying that don't go there will be a tiger, but there were only footprints of bears and bones of 4-5 dead animals were seen.

Budher Caves are located in Moyla Bugyal and all the great Himalayan peaks are visible from this place.

A white layer of snow lay under the blue sky and green meadows and forests below.

For two-four hours Moyla goes out in the meadow of Bugyal, it is not known.

If you ever get a chance, come and spend some time at this place, undoubtedly it is one of the most beautiful places in the world.