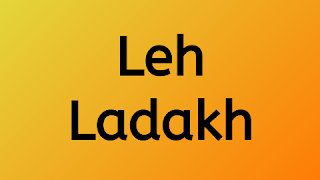 Leh is like the heart of Ladakh. And the beating of this heart is the market here.
Trekking essentials like oxygen cylinders, snowboots, backpacks and even everything related to camping and biking are easily available in the market.

To see the beauty of Ladakh, Leh City is the base camp for tourists, be it ordinary tourists or adventure tourists,

who come to trek the famous chadar trek on the frozen Zanskar river in minus 25 degree temperature.

This small town caters to everyone's needs. Leh is like the heart of Ladakh.

And the beating of this heart is the market here.

These markets are buzzing day and night, fulfilling every need of the tourists.

Trekking essentials like oxygen cylinders, snowboots, backpacks and even everything related to camping and biking are easily available in the market.

If you want to buy something local to take home, then buy pearls from the market.

The main market of Leh city is full of brand stores as well as lavish stalls of local Ladakhi goods.

The long market road leads to the most beautiful mosque in Ladakh.

It is influenced by Ladakhi Buddhist architecture.

Its aura is visible on sight.

From here a path leads to the Central Asian Museum. This museum was built by the famous painter Mustafa of Ladakh.

He roamed the inaccessible areas of Ladakh and collected antiquities from the people here and built a museum.

The top floor of the museum gives a 360 degree view of the entire city.

By reaching here you will feel that the journey was successful.

From here the Shanti Stupa, Leh Palace, Gurudwara, Leh Mosque and Monastery are seen as if a painter has painted the landscape of Leh city on canvas.

A small Ladakhi kitchen is built in the front of the museum.

When you get tired of roaming around, sit here and enjoy coffee and hot momos and Ladakhi Thukpa soup.

If you are bored of eating Ladakhi dishes, then you will also find Punjabi dishes like chole-bhature in the main market.

While roaming around the market, you will also see many restaurants around that also serve some continental, Chinese, Thai, Italian dishes keeping in mind the foreign tourists.

This shloka of Durga Stuti kept resonating in the ears since childhood!

Mother's name was Bhagwati and perhaps it was her name that instilled such deep faith in her for Goddess Durga.

In both the Navratras she used to recite for nine days and once in those days we used to go to the temple of Shila Devi.

Growing up, I heard the name of Durga Bari, where Bengalis used to celebrate Shardiya Durga Puja.

Later we saw a puja fair held every year by migrant Bengalis in a large garden near our house where professors and banks, from officers to laborers, celebrate the mother's arrival.

We also went for Sandhi Puja and Pushpanjali several times.

When I saw 'Sindoor Khela' for the first time on the day of Maa Durga's farewell,

it seemed that Holi-Diwali of Bengalis is all this Shardiya Puja. Then it was decided that once to see Durga Puja of Kolkata.

Four years ago, when a friend from America came to India,

he made a program to see the puja with another friend living on Kolkata Park Street.

The surprising thing is that he himself had never seen such worship as he had seen with us.

The grand mandapas of Durga Puja, called 'pendals' there,

are built in collaboration with communities as well as advertisements from big companies.

I knew this, so I took the help of my brother Piyush associated with the advertising world.

Then one morning bought tickets with a travel agent to see the Durga Puja of the royal houses of the old city.

When the printed booklet of the admit cards came in our hands, it seemed that we would be able to see so many pandals or not.

We made a list and left early in the morning.

Every pandal is made with a specific theme, which can be of today's, old as well as some foreign.

In 2017, the mega-hit film Bahubali had the grand palace of Mahishmati on the one hand, the Buckingham palace of Queen Elizabeth of England on the other, and the goddess Durga seated in both.

A question was coming in my mind again and again that when and who had started such a grand event?

The answer was given to me by our guide while walking around the old city.

We went to Sowa market early in the morning. There are the old royal houses of Kolkata, the most important of which is the Rajbari.

This grand building was built by King Nabakrishna Deb in 1700 AD.

He is said to have helped the British in the Battle of Plassey fought alongside Nawab Siraj-ud-Daulah and organized the first grand Durga Puja at the palace after the Nawab's defeat.

Sir Warren Hastings and Lord Clive were also invited. In front of the Rajbari is the small Rajbari, where the general public can go inside only on the days of worship.

The credit for celebrating the mass worship is attributed to twelve friends of Guptipara who collected donations in 1790 and organized it for the people and named 'Baroh Yaari'.

This was the birth of 'sarbojanin' or public worship.

Every year after returning from Kolkata, I inquire about the worship.

The biggest event of this year will be when women priests will perform puja for the first time.

Burj Khalifa, the tallest building in Dubai, will also be a big attraction.

A pandal will also depict the farmers' movement. Watching Durga Puja in Kolkata or visiting Kolkata in Durga Puja is a memorable experience.