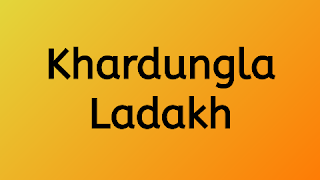 Whoever said that the paths are more important than the destinations. The truth has been told.
This is how I felt after reaching every attraction of Ladakh.
Khardungla is the highest pass in the world. Its altitude is about 18 thousand feet above sea level.
By reaching its peak, you will hardly be able to pass five minutes, but the journey to reach here will be etched in your memories forever.

When I left the hustle and bustle of Leh city and headed towards Khardungla,

it was not even in my imagination that I would get to see something that I had never imagined.

As the city left behind, the sky got darker and darker. Such a bright blue sky that the eyes should be dazzled.

Behind me the mountain ranges of Ladakh and Stock Kangri look like a painting on a canvas.

There are so many twists on these roads that the counting has been forgotten.

I thought I would remember.

These paths are as heart-wrenching as they are deadly.

The Border Road Organization has decorated the vehicle which was shattered in a previous accident like a show piece so that the visitors here do not forget that the accident happened without caution.

On these icy roads, only these signs alert people. Although it seems strange.

We had reached the top of Khardungla Pass in barely an hour.

After reaching such a height, both heart and mind were not at their place. Strong icy winds welcomed me with outstretched arms.

It is a flat place on the top of the mountain, on the other side of which comes the Nubra valley after the slopes.

Here is the base camp of the Siachen Warriors of the Indian Army.

Some Buddhist monks were tying up flags, which pray for everyone's well-being.

I kissed these ensigns with my eyes and headed back to Ladakh.

Filling a different kind of happiness within me, I was now satisfied with the magnificence of nature.

Delhi, the capital of the country, has many unique specimens of architecture and craftsmanship,

but the most different among them is the tomb of the Mughal emperor Humayun.

Today, visit this monument, which apart from being the largest monument of South Asia, also has many qualities in itself.

Whether it is a matter of culture, history, place or architecture, its uniqueness is made in every sense.

This building, built in the 16th century, is a tomb to say, but the grandeur is as if in a grand fort.

Whether it is the main gate or the main building, the sight rises and stays for a long time.

As we take the first step inside the fort, we find ourselves in the pages of history which tell the story of this mausoleum built in the midst of the evolving and deteriorating history of the Mughal Sultanate in the past five hundred years.

The mausoleum was started in the memory of Humayun by his wife Hamida Banu Begum in 1565 while the structure was designed by a Parsi architect named Mirak Mirza Ghiyath.

Since then, this monument has seen many good and bad days, after being built,

it has witnessed many tales and was finally declared a World Heritage by UNESCO in 1993. Presently it is the best example of Mughal architecture.

This garden mausoleum is surrounded on all sides by walls which include beautiful gardens, small water channels, fountains, footpaths and many other things.

The best and most beautiful thing is that if you come to visit this place, you can also see many other contemporary monuments within this boundary wall.

All these monuments belong to the Mughal period and in themselves testify to the history and architecture of that time.

Humayun's tomb is bigger than any other tomb in the Islamic world.

It is the first specimen of the Charbagh style in the Indian subcontinent, which is spread over 30 acres and embodies the concept of four gardens with four rivers of paradise written in the Quran.

Gardens and gardens are not found in any tomb built before the construction of this monument.

The entrance of this tomb is 16 meters high. On entering through the main door,

there is a view of the Char Bagh and the lake, in which the four drains appear to enhance the beauty of the main building.

The tomb is built on a platform eight meters high and 56 chambers are visible in its foundation,

in which there are more than 150 tombs.

This is the reason why Humayun's tomb is also called the dormitory of the Mughals.

In addition to Humayun's tomb inside the walled enclosure around this tomb, his wife Hamida Bano and later Emperor Shah Jahan's eldest son Darashikoh and

What I remembered the most after shifting from Delhi to Mumbai was the trips to the hill stations of Himachal and Uttarakhand.

Then a few days later came to know about the hill station Igatpuri located near Mumbai, the financial capital of the country.

A friend told that surrounded by the Sahyadri ranges on the Western Ghats in Nashik district of Maharashtra,

Igatpuri is no less than a paradise for nature lovers.

At first I could not believe it, but as the weekend approached, my mind suddenly got ready to go to Igatpuri.

Igatpuri Hill Station is about 130 kms from Mumbai on the Mumbai-Agra National Highway.

It is counted in the major hill station of Maharashtra.

When he reached Igatpuri, he was mesmerized to see the beauty there.

Nature has beautifully decorated this place. The journey from Mumbai to Igatpuri involves many ghats and many scenic views.

On one side, the high green hills, and on the other side the beauty of the river flowing in the valleys.

Since this place is very conducive for photography and photo sessions, many films have also been shot here.

Various types of public transport are available to Igatpuri,

but most people prefer to go by private vehicle as Igatpuri is a popular weekend destination for the people of Mumbai and Pune.

We also took our car and reached Igatpuri after a pleasant journey of about three hours.

Igatpuri is known all over the world for its ancient temples.

Coming to this place, one must definitely see the Ghatanadevi temple dedicated to Ghatandevi, the protector of the ghats.

Seeing the beautiful view of the valley below and the Sahyadri ranges from this temple, the mind jumps with joy.

Apart from tourism, another thing that Igatpuri is famous for is its Vipassana centre, which also conducts a meditation yoga course.

Tourists should keep this fort a priority during their visit to Igatpuri.

From this fort built 3000 feet above sea level, the mind gets thrilled to see the wonderful and pleasing views of the entire Igatpuri city and the Sahyadri ranges.

It is at this place that the unique museum depicting the life of Shivaji Maharaj is the Walawalkar Museum,

which I hope you will definitely like. There are many places to visit in Igatpuri.

Winter and monsoon are the best time. There are ample options for food and accommodation as well.

This place is truly a paradise for tourists looking for solitude away from the hustle and bustle.

Apart from the old forts, majestic waterfalls and high mountains, Igatpuri is also great for activities like rock climbing and trekking.